Symbolism and Symmetry at Stormont

Stormont is associated with scenes of massive political wrangling, with heavy bureaucracy, with feelings of immense frustration and confusion. I have made a few visits recently, and it’s disconcertingly peaceful and welcoming.

The large white house at the top of the hills of East Belfast sits in the Stormont Estate. As a visitor to the Estate you can do the following (all for free)

Some things I picked up at Stormont

The symmetry and symbolism in the architecture is heavy, and made me want to break something to disrupt it. No wonder it’s hard to think in there.
The Number 6: to represent the 6 counties of Northern Ireland: there are 6 floors, and 6 pillars and 60 steps at the entrance
Symmetry: according to the guide you could fold the building in two and it would match up exactly, each object has one corresponding, including the bins.
The architect: Arnold Thornely, an English architect who practised mainly in Liverpool. He made exceptions for Belfast and for my childhood home Barnsley, where he designed the town hall (which bears a striking resemblance to Stormont)
Art: further in to the main hall, beyond the dazzle of the architecture it’s the stare from a portrait hung at the end of the hall that you really feel. It’s a painting of Ian Paisley by Irish artist David Nolan. It’s impressive.
As are, in a different way, the works in the main hall by Belfast School of Art Final Year Illustration Students (on display since 03 March 2016).
Politics in action: the Assembly was in session during our visit so we slipped into the Public Gallery to have a look. TV monitors made it easy to see the participants but the sound system wasn’t great and as most speakers talked down into their paper it was tricky to hear exactly what was going on. 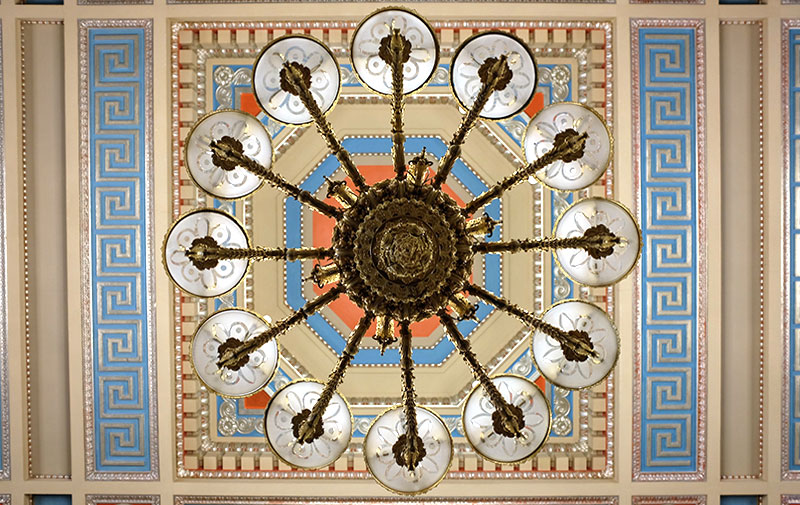 We visited on International Women’s Day so what I did understand was that the Assembly agreed to support the celebration of International Women’s Day 2016 and Assembly Women’s Week 2016 and advocates the establishment of a women’s parliamentary caucus. The caucus is cross-party and its vision is to create “A united Women’s Assembly Caucus, working together irrespective of political party affiliation, to ensure equality for all; to provide an opportunity for women to exchange and ensure there is cross-party collaboration on ideas; to form collective platforms on particular policies and actions and; to support one another on issues and areas of common concern”. Friends on the inside have suggested that most discussions around gender-equality are met with the male riposte of the importance of ‘work-life’ balance. I think I’d want to be part of a caucus if that were the case. 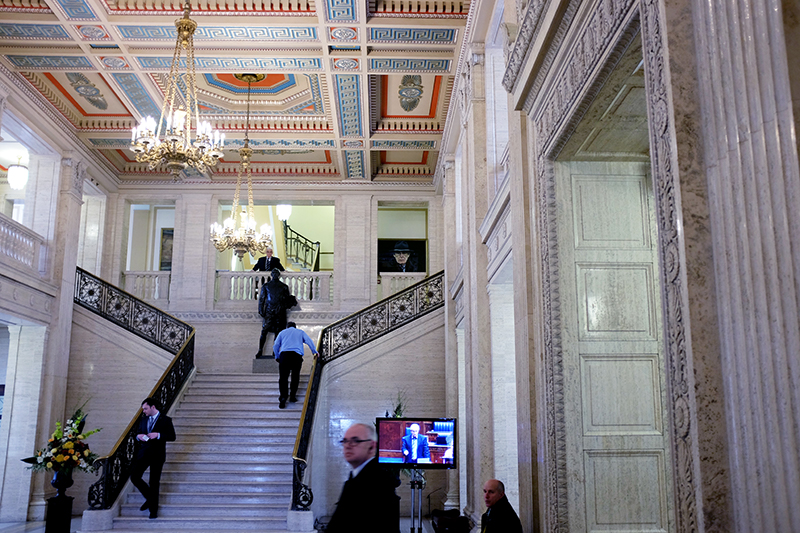 Staring from the end of the hall © Aptalops

Open to the public 9-4pm. You can see the Great Hall and visit the coffee shop and gift shop (where you can buy an NI Assembly towel – what’s not to love?)
Guided tours daily at 11 and 2. No need to sign up. Our tour was only 15 minutes and wasn’t exactly a tour as we were stationary in the main hall as the Committee and Plenary rooms were in use (fair enough!)
You can drive up and park pretty close to the building, then it takes a few minutes to go through security/have your bag checked. No ID needed, but if driving on to the estate it is sometimes asked for.
Find out more about activities on Stormont Estate.