In Tarkovsky’s 1979 film Stalker, three men journey through the ‘Forbidden Zone’ – a damp, overgrown wasteland where the rules of nature no longer apply. Their goal is to reach a place within the ‘Zone’ (known as the ‘Room’) which is said to have the ability to fulfil a person’s innermost desires. The film was shot in various deserted power plants and chemical factories near Tallinn – the locations have since been renovated or repurposed.

Adventurers will experience a post-industrial wasteland gradually being reclaimed by nature, similar to that depicted in Tarkovsky’s masterpiece.

Belfast would seem to have its own ‘Forbidden Zone’ surrounding the site of Harland & Wolff, the same firm that built all of the ships intended for the White Star Line including the ill-fated RMS Titanic. As a working heavy industry, there is no public access to Harland & Wolff. However, the area around the razor-wired perimeter fence can be accessed easily enough and adventurers will experience a post-industrial wasteland gradually being reclaimed by nature, similar to that depicted in Tarkovsky’s masterpiece.

One Sunday morning I tried to enter by the main gate to H&W but was met by a suspicious security guard drinking from a ‘Pink Floyd – The Wall’ mug. He had left his gate lodge to meet me as I approached and after listening cautiously to my questions about the possibility of ‘having a cycle round the area’, warmed slightly and pointed me in the right direction i.e. the opposite direction.

Rotting machinery, now meaningless road markings and the remains of long-ceased activity litter this place. Mounds of earth have become overgrown, pavements penetrated by weeds and although I saw no-one on my visit I found footprints and graffiti in unlikely places. I can’t quite explain why I love this part of the city but it has something to do with scale – everything down here is bigger: vast warehouses, empty expanses, big skies; it’s unlike anywhere else in Belfast. There’s also the exhilaration of entering what seems like unchartered territory. And finally, a feeling of fleetingness – one gets the sense, like those once abandoned power plants and factories in Stalker, that this area won’t stay like this for long. 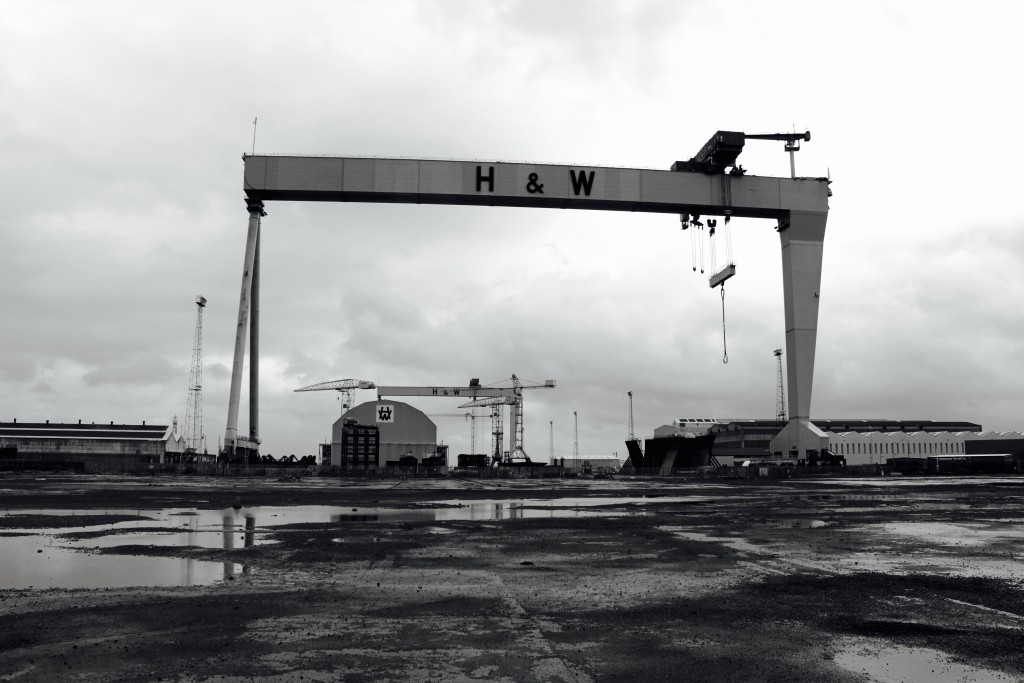